The Obstacles I face to develop footballers as a coach. Most academy coaches can identify with me that keeping kids in line is a heck, but then lashing out is terrible not just on the kids but on the coach as well, because it stays with you, knowing that it’s not a good set example. Lashing out on a kid or a team as a coach is as a result of losing your patience. It doesn’t matter if it’s your team or an opponent team. However, happens especially in your team due to deliberate and repeated silly things kids do. It’s merely passion, being passionate about your job.
However you may want to see it, Kids are kids, and will always be kids. Your emotions can’t change a thing instead it will create a more dire situation for you both and with the parents and even the world at large.
Bear in mind, that winning matters to them more than it matters to you as their coach. For you, winning is just a show or a way to measure your success in their young l, and of course, your career records as losing will give you something to look into.
Kids have one thing in mind, to win and feel good about it at that moment. A coach has more things in mind to win, to develop his kids, to keep them disciplined and focused in the activity mentally and emotionally…and their behavioural paradox outside the pitch of play. However, why do kids deliberately try to thwart your session’s flow?

Boredom: number one reason is that they are bored, boredom pushes them to find something fun to do amid the session. Most technique building training session seem tedious, and their defensive mechanism alerts it bored, but that’s where they would learn better if you as the coach will find the balance.

Power contention– like every living thing does contend over territories, who will lord over it, this has no differences. It’s a deliberate ploy for most kids to feel distinguished and influential to themselves, yet to cover up their inabilities or deficiency in techniques, having understood that some other kids are improving better than them. It helps them feel powerful to bully or muscles other kids and possibly their coach. It’s an adaptation for getting attention and attracting allies to themselves.

Emotional challenge– Some kids find it difficult to focus or concentrate, it’s a brain thing though, (neurotic process and development) their level of concentration is very low. That doesn’t mean they are incapable players, but in this case, coaches should be able to identify and attend to their development with their own pace, not overstretching them.

Appreciation of the particular– in as much as adults in their lives wants them to play in a specific activity for the own reasons best know to them. It’s essential to appreciate the peculiar or particular game the child is in love and let them go for it. A friend of mine who is the best goalkeeper coach I know lamented the other over his son’s intention of giving up goalkeeper to driving fast cars…he’s got no choice but to support this young man’s decision of activity, though he’s still hoping that his son will one day…

Orientation from home: behavioural difficulty amid training sessions can be the result of upbringing from home. Of course every parent want the best of their child, and doing everything to raise them with confidence and all it takes but some home training ruins it for us coaches out there…it’s ok for a child to ask you to play them in matches only, because they are finding it difficult to flow with drills. Some also find it difficult to differentiate between actual child’s play and sport training exercises

Parental advice– one kid said “No I’m not going to listen to you because my parent paid you to tolerate my flaw behaviour…and I will deliberately spoil it for other kids of whom their parents paid for too”.

Not feeling challenged enough– change your strategy, reinvent your approach because it’s like the same as them feeling bored.

Not feeling motivated– be more creative with your session plans (drills and setups) set more competitive sessions or roles for them it will make them want to win again and outshine others. 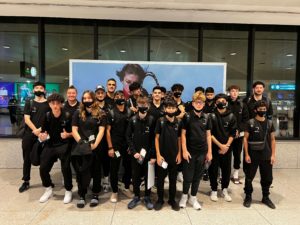