A combination of our u12s & U14s participated in the U14s category at Dubai Winter Classic 2019.
Our team won the U14s Trophy by beating a team from Saudi Arabia in the final. The opposition showed resilience by defending well all the way until the end. We had more than 10 corners, but the goals finally came from a long shot by Abdallah.

We played against teams from Pakistan, South Africa & Kenya on the way to the trophy finals.

From the beginning, we asked our players to put in play what they’ve been practicing for the last couple of months. The coach was barely involved in giving instructions to players; It was the players themselves who took responsibility and played the most Beautiful Football this season.

Our players have been working on movement off the ball during our High Tempo Selection Session, The effects of such training sessions were clearly seen during this tournament.

Congratulations to all our players who showed character by sticking to their Beautiful Football game plan. 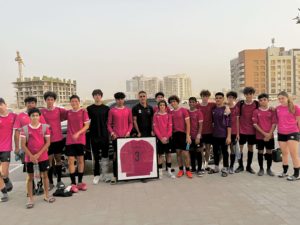